Few would argue that we live in a world of increasing uncertainty, a world where citizens are becoming increasingly anxious about the many challenges before us –  fallout from the pandemic; the assault on Ukraine; concerns over inflation and affordability, the threat of rising interest rates, and a general inability to get ahead.

And nowhere is this uncertainty more pronounced than in housing.

As a parent of a 30 year-old and a 26 year-old  looking to fulfil their own dreams of homeownership, I know firsthand the enormous difficulty they are experiencing trying to save enough to enter the housing market, let alone support the mortgage that will likely follow them for a lifetime.   In fact, in the absence of our assistance, they could never afford to get in.

While the challenges surrounding this hot topic are multiple and complex,  the primary issue is without dispute – we simply do not have near enough supply to meet the demand.   In fact, the statistics are startling.  Canada ranks near the bottom of developed countries  in homes per capita, Ontario ranks near the bottom of Canadian provinces in homes per capita, and London’s new home builds mirrors the same low rate of major cities throughout Ontario.

A recent report by the Ontario Housing Affordability Task Force cited that Ontario needs to construct double its output to an estimated 150,000 homes per year just to meet the existing demand, let alone accommodate newcomers.

Clearly, it is one of the top concerns continually expressed by voters at the door and the one most in need of immediate action if we hope to temper the increases in home prices anytime soon.

To this end, today’s blog focuses less on how we got here and more on what both me and my party hope to bring to the table to help resolve it in our community.

To begin and to its credit, London is experiencing one of the most rapid and impressive increases in population anywhere in the country.  Unfortunately, like many cities throughout the province, this rapid population growth has not been matched by a similar growth rate in the supply of available housing.   While London’s population grew by 10-percent over the past five years, the number of dwellings only increased by 6.2 percent.

Not surprisingly,  a lack of supply coupled with an increase in demand leads to higher prices and in the case of London – much higher.

Several issues contribute to this lack of available supply.  They include a:

And while London’s planning leadership team and processes have improved, one builder characterized it as “still very challenging”.

In response, the Ford government introduced legislation to boost housing starts, and make it easier to purchase a home, including;

However, much work needs to be done. 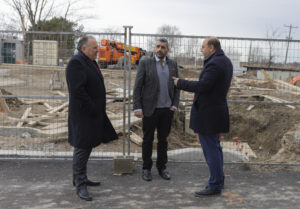 A Path To Increased Supply

In my view, London is uniquely positioned to play a significant role in the expansion of our housing supply both in the region and across the province.

For one, London would benefit greatly by electing a Progressive Conservative in the upcoming provincial election, thereby giving it a seat at the government table and an ability to positively influence housing policy in this region.

Second, I would welcome the opportunity to partner with Mayor Holder, Deputy Mayor Morgan, and Councillors like Lewis, Lehman, Hamou, Hillier, Peloza, Van Meerbergen, and Fyfe-Millar, with whom I have a respectful working relationship and who have demonstrated through their voting record and innovate approaches, a strong desire to increase housing supply in our city.

Third, I believe that the province, municipality and builder community should partner on the introduction of new tools, rules and resources all designed to speed up the permit-to-completion process.  Examples include: greater end to end digitization of the approval process, expanded ‘right-of-use’ zoning rules, fast-track inspection approvals from qualifying high-integrity builders, and increased minimum height requirements to facilitate intensification.

Finally, the province and municipality should revisit the urban growth boundary to ensure that there is sufficient space to accommodate new housing within the city limits rather than see buyers purchase their homes outside of the city and lose the resulting tax base to surrounding towns while paving over valuable farmland.

In summary, London stands to benefit greatly from this influx of population, jobs and opportunity, if it is willing to nominate leaders who both recognize the challenges and are prepared to rise above them, for the good our residents, our newcomers, and young first time home buyers and our neighbourhoods.